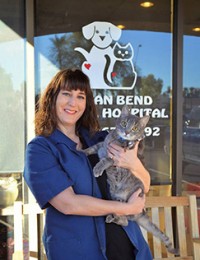 Dr. Scotti Gulinson has been practicing veterinary medicine for 17 years. She was raised on a farm in Missouri and moved to Scottsdale when she was nine years old. She attended Arizona State University and graduated as valedictorian in 1995. While attending ASU, Dr. Gulinson participated in respiratory physiology research which resulted in her having a paper published in The Journal Of Experimental Biology.

She moved to Davis, California right after college graduation to work in the equine ICU department at UC Davis. After graduating from UC Davis in 1999, she practiced emergency medicine at a 24 hour critical care facility in Sacramento. In 2001 she moved back home to Scottsdale, where she practiced at Scottsdale Ranch Animal Hospital for 14 years.

Although it was very hard to leave the staff, clients and patients she had grown so close to over those years, in 2015 Dr. Gulinson realized her dream of owning her very own animal hospital by purchasing Indian Bend Animal Hospital on December 31. She and her husband Greg have one son and one daughter. The kids were so excited to be a part of the search for the right animal hospital, and they are thrilled to call Indian Bend their second home (it doesn’t hurt that there are 4 hospital cats to play with when they visit)! Dr. Gulinson is also the co-leader of her daughter’s girl scout troop. In her spare time Dr. Gulinson enjoys dance fitness classes, yoga, reading, drinking wine, cooking and watching her daughter perform at local dance competitions.